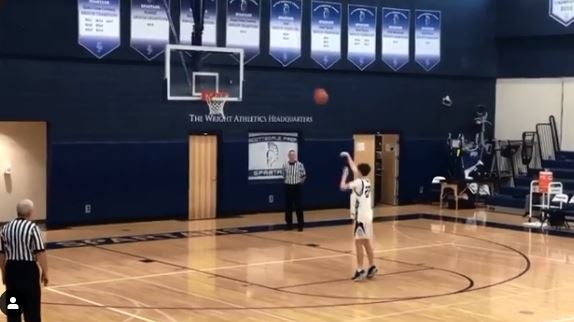 The Spartans had circled this game on their schedule after a tough loss against Camp Verde back in January. The game got off to a strong start for SPA as they led 14 – 7 going into the 2nd quarter. As expected, Camp Verde did not back down and fought to bring the game back into their hands. Scottsdale Prep played great defense but gave up too many offensive rebounds and second chance points to let the Cowboys take the lead.

The pressure from Camp Verde in the 2nd half led to some Spartan mistakes and dry spells from the offensive end. Late in the 2nd half, the Spartans were down 36 – 30, but rallied to tie the game at 36, then, 39, then 41. With only 5 seconds left, the Cowboys took the lead 43 – 41 on two clutch free throws. The Spartans called a timeout and drew up a play that took the ball the full length of the court. Jackson Bird caught it in the corner and put up a shot at the buzzer. The ball rimmed off to the corwd’s dismay….but he was fouled on the shot! With time expired and the clock reading 00:00, Bird went to the line to shoot three free throws. After making the first and second, the game was tied 43 – 43. As the last one hit the bottom of the net, the crowd went wild as the Spartans stormed the court in victory. A great team effort on both sides of the ball leads JV Basketball to a big win over an undefeated Camp Verde team. The Spartans will next play at home on Monday 2/10 at 4pm against Lincoln Prep in their season finale.

No Events This Week

Events are added by athletic staff.
View All Events